The Aim: remind breeders of the success of the progeny by Newsells Park Stud’s stallion Equiano and his ranking compared to his peers to attract another quality book of mares.

The campaign focused on a ‘speeding ticket’ theme given Equiano’s progeny were proven sprinters and his most recent Gr.1 winner Belvoir Bay broke the 5f course record at Santa Anita racetrack.

The mailer comprised of a flyer entitled ‘A speeding ticket you wouldn’t mind having!’, with creative copy around the theme including statistics and tables, along with a call to action to the breeder to send their mare on a speed awareness course with Equiano. This was sent with a chocolate bar designed like a speed camera to capitalise on the stud’s association with chocolate.

The campaign was promoted across Twitter and Facebook with the use of images and gifs showing relevant statistics/sire leading lists. A competition also ran on Twitter encouraging people to guess Equiano’s key winners with the branded chocolate bars used as prizes.

The campaign complemented the annual advertising plan prepared by Pace which included the services: media buying in bloodstock publications on key dates in the bloodstock calendar, budget management, copy writing, editing, proofing and submission to the publications. In addition to success advertising throughout the year triggered by Equiano’s progeny winning notable Stakes races.

To encourage a call to action breeders were offered a reduction in the nomination fee if they booked before a certain date. A previous successful sales promotion offered breeders a rebate on the nomination or a free return to Equiano if their mare produced a filly. This was promoted as the Filly+ Scheme and was promoted around a cheeky ‘No Balls’ theme, with a novel ball-shaped pop-up mailer and chocolate balls. 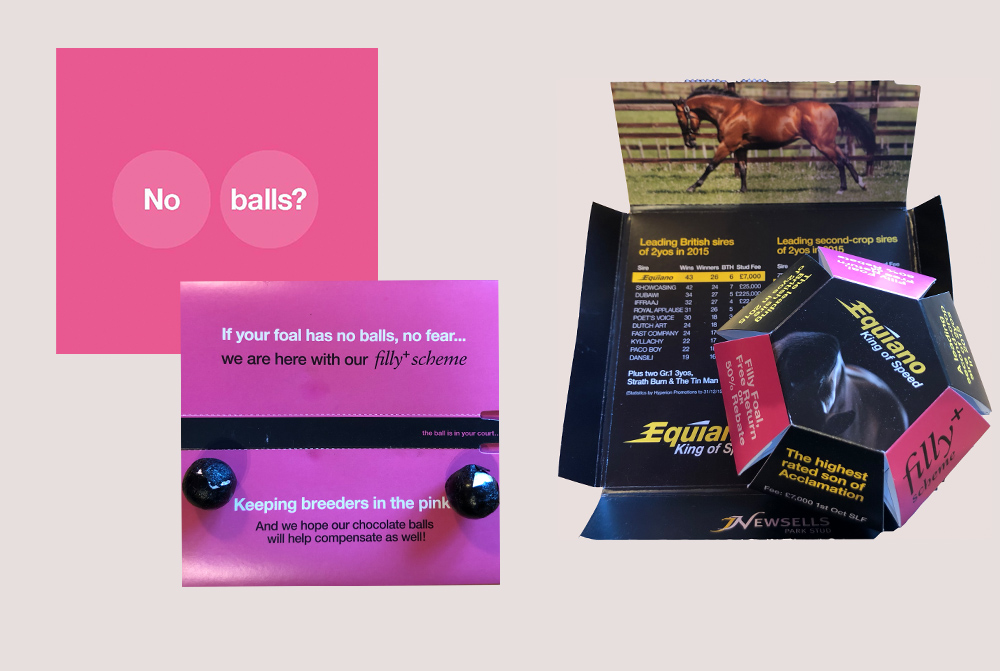